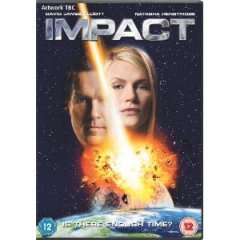 Some films are content with just having a meteor crashing into Earth, Impact however would much rather have a meteor crash into the Moon, which sends the Moon itself crashing into the Earth! Cue a 3 hour TV movie full of hammed up disaster action, which actually does a very good job of holding its own suspense and pacing, and succeeds much better than most TV disaster movies.

Once in every god knows how many years, a meteor shower flies close to the Earth. Everyone comes out to watch it however behind the shower is a meteor (and a brown dwarf as its later revealed) which veers offcourse and smacks into the Moon. This sends the Moon off orbit causing no end of strange scenarios and resulting in the discovery that the Moon is now destined to crash into Earth in 39 days. Can it be stopped?

Here we have meteors, chunks of the Moon falling to Earth, the Moon itself coming to Earth and gravitational fluctuations causing some hilarious sequences.

As with all three hour disaster movie mini series, there’s a lot of story and White-House style chaos. Impact though manages to intercut all this with just small little disaster clips and so actually three hours goes by a lot quicker than you’d first imagine. The key to this is a generally good cast. The leading trio of David James Elliot, Natasha Henstridge and Benjamin Sadler all underplay their characters so the film avoids being over acted and silly and gives it all a bit of credibility. Steven Culp does a good president avoiding a lot of the usual bunkem, although America seems easier to deal with than Bree from Desperate Housewives! The children are also very good with the amount of crying they do, yet don’t become annoying upstarts. The only character I found annoying was Lloyd, the uncle who manages to get his speech out before he pegs it. Martina’s voice is very jarring as well, maybe because unlike everyone else on the German side of the story, actress Florentine Lahme is actually German and doesn’t need to pretend. However she plays her role very well.

As a result the cast work well together, there’s some nice views on how when faced with the world’s end, everyone actually stays calm and spends time with their loved ones, instead of running riot. Also the range of disaster sequences are quite refreshingly different too.

The effects are a real mixed bag. A few of them, such as the ship lifting out the water, looks pure CGI and very poor at that. However when the CGI effects are worked into the real world, such as the meteor showers, the cars lifting off the floor and to some extent the train sequence, things fair much better. The cars in the city sequence in particular is quite believable and is one of the set pieces of the film. When the CGI is gone and we have pure set work on screen, the results are very good. In what is obviously a low budget film, there’s plenty of carnage on screen for the aftermaths and using clever camera angles, it makes things look a lot more hectic than what was really there.

Impact is an example of a good made for TV disaster movie. The acting is good, the effects passable, the pacing ensures there’s always something going on. It serious enough to not look like a complete farce and its quite clear a lot of effort has gone into making the film be the best it could be from the materials they had, even if the science is a bit wobbly. If you close your mind and run with it, there’s some good stuff to be had here.

Benjamin Sadler’s character Roland Emerson (is that a tip of the hat to someone else I wonder…) has more personality and character than most scientists in his little finger than most of the rest of the characters. That is why I knew he would die! It’s Shelley Winters & Jennifer Jones all over again!

Surprisingly there’s not many to choose from but perhaps one of most unfair and comical was that of the female rocket pilot who fell to her death right at the end of the film… but in extreme slow motion due to the gravity on the moon meaning everything happens a whole lot slower! She was screaming for a loooooong time.

Apart from the dad and son clinging onto the swing moment to massive dramatic music, the most “huh?” moment came for me at the end when everyone is busy hugging each other  the little boy smiles and hugs the man who gave his grandpa a heart attack and killed him literally! Now all of a sudden they are laughing, joking, smiling and hugging each other. I’d have thought a headlock would have been closer to the mark!

Impact is good at what it aims to be. An interesting, but not very deep, made for TV disaster movie. It doesn’t have the usual sag in the middle like most of the films do, keeps you entertained throughout and at the end of the day, if you actually want to return to the dvd in a few months time to watch it again, it can’t be that bad a film at all!