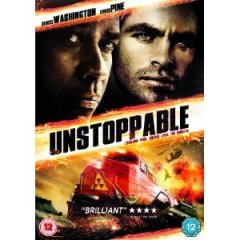 He absolutely will not stop until you are dead! Oh no, wrong film! This’ll be the one about the train that rolls away and someone forgot to leave the parking brake on then! Entertaining despite few thrills and spills, Unstoppable is a fairly decent disaster/action flick.

A massive train with chemical explosives as cargo is left running unmanned at full pelt down a rail track where if it doesn’t take out other trains or towns before hand, it will certainly meet its doom in populated Stanton where a tight curve will ensure it will derail… unless someone stops it!

A speeding train, a horse cart, a dithering higher management type, a lot of braking and a overjelous male lead who apparently wants to shoot his best friend?

“Unstoppable” is the kind of film that want’s so desperately to scratch its own testicles with one hand while downing a can of beer in the other while it tells some one else to get lost. It’s that kind of male aggression that smears over the two male lead characters, the train itself, the camera work and the never-ending reaction shots to everything that’s going on. If you’ve come here for a story, it’s condensed into very, very small chunks and a lot of the back story doesn’t make sense, nor does it endear you to Chris Pine’s character at all. In fact, I can’t think of a more unlikable “hero”. Still, the runaway train has run away within ten minutes however what director Tony Scott manages to do is to stretch out just a few set pieces of action by spending a long time anticipating the build up to them. The only problem I had as a viewer was after lots of tension cranking, the set pieces themselves were actually relatively calm and collected. Maybe it’s because it’s the balls-to-the-wall production that alines it with the likes of Die Hard, I’d have imagined more to happen than actually does.

The train itself looks good although you can’t help but notice how it seems to speed up and slow down between shots. Aside from that, the effects, explosions and stunts are very well done, intercut and showcased. I just wished there were more set pieces!

The way the film plays out reminds me of Cassandra Crossing, where we keep referring back to the curve (or bridge in that films case) that we know is going to spell disaster when the train arrives. As the film progresses you can sense its character overshadowing the films events. We also have good acting from Chris Pine, Denzil Washington and Rosario Dawson as are leading trio dealing with problems, even if sometimes their characters aren’t very likeable. For the error spotting buffs in movies, there are an absolute truck load to spot here too from continuity to the train numbers being mirrored the wrong way. All good fun!

Complete with train derailment and massive explosion, how could you not win with that Judd! Whilst not dying, there is a particularly painful looking stunt where a man tries to jump on top the train and there’s a sickening thud.

Connie is fun and Ned is a great if random cast addition but Denzel Washington’s Frank wins as my favourite because despite being choppy at the beginning, you quickly find out why and understand exactly where’s he’s coming from.

I have to say, Chris Pine’s back story just makes his character go from neutral to unlikable in one fell swoop. Quite why his girlfriend then comes running to his aid at the end is beyond me. Plus the poor woman, her entire word count during the entire film is “Come on” followed by the occasional gasp.

Mindless, testosterone filled action disaster movie where sadly despite all the slick camera work, the actual set pieces themselves are a bit of a damp squib. It still kept me entertained but I did not feel fully emerged in the film at any point. Best with a beer, a curry and a good warm up to a bigger action flick after. I needed some Bruce Willis after.