Where most films go for the love story, A Night to Remember goes for the documentary view-point, trying to keep as much to facts as possible. As a result, for many, this is the definitive Titanic film and it’s just been remastered and re-released.

An almost documentary-like view of the sinking based on survivors tales.

Death by irony it seems. “I’m not going in the lifeboats, I’ll catch a death a cold!”

Following primarily the 2nd Officer Lightoller, we follow Titanic’s plight and also the California’s non-rescue and general confusion from an external view. Filmed in black and white, everything still looks really well done and this is once again due to meticulously built sets and no digital effects to speak of. As usual, there’s a good cross-section of other people to follow too but while it’s still emotional and dramatic, it somehow feels more authentic and less gimmicky with your the heartstrings. There’s a matter of fact way about things – a sternness and dry approach. It works because people are talking logistically first rather than emotionally and as things get more difficult over time, the emotional side slowly creeps in almost noticed.

A Night to Remember stands the test of time remarkably. For a film made in 1958, the sets, stunts, effects and camera work is simply amazing. I do like the onboard shots of Molly Brown’s lifeboat going down the side of the ship. I’ve not seen the digitally remastered version but it can only make the picture better and the sound is possibly the only thing can be improved.

As an almost real-time enactment of the sinking, nothing gets closer to the actual events of the Titanic. Instead of spending time following fictional characters, this keeps things closer to the real survivors’ stories. The sinking itself is done respectfully and dramatically and strikes the perfect balance between documentary and drama. If you have the original DVD release, the disc is 2 sided – an unusual feature in itself. On the flip side is an excellent feature-length documentary on the Titanic itself – so you get double the bang for your buck.

For a drinking game, have one every time you see the chef having one! 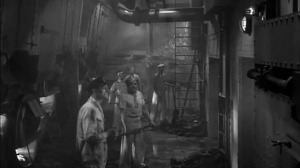 Aside from Kenneth Moore, the chef played by George Rose is great and although he adds light relief to the picture, it’s amazing a true story. Who’d have thought getting absolutely drunk would have saved his life?!

“I must have my lucky pig!” I beg your pardon?!

Lawrence Beesley, a survivor from second class, was on the set during filming. At one point when the sinking was being filmed, he attempted to enter the scene and – perhaps symbolically – “go down” with the ship. Director Roy Ward Baker didn’t allow this, as it would have been a union violation, which could have closed down production.

I have a soft spot for A Night to Remember. It gets better with each viewing. I still marvel at how it holds the test of time today and if anyone wants to see a proper factual account (aside from the Titanic not splitting in half) then this is probably one of the best sources you will ever get.