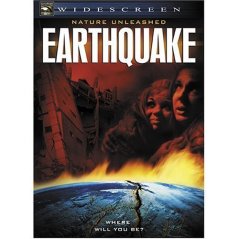 The Nature Unleashed series has certainly had its comedy moments but by far the best of the set is Earthquake. Despite its strange accents, poor dialogue and inaccuracies – it’s still fairly good fun.

Lots of Europeans pretending to be Americans are in Russia (why not cut the middle man?!) working on a nuclear plant when an Earthquake strikes. Will the plant go up? (No, its a low budget film!)

Earthquakes, train crashes, falling debris, an elevator and a wide variety of accents and me man you ape dialogue delivery!

The plot surrounds a broken family of four spread across a Russian city when the quake hits. For the first quarter of an hour our two leads row with eachother before they even announce they were married before. You know then they’ll declare undying love before the credits role. Everyone in Russia appears to be pretending to be American. None of them really get away with it.

The main two sets are a train wreck with the daughter and her teacher, and a fairly impressive looking nuclear plant that was obviously built by cowboys as it falls apart at a rate of knots. While the effects aren’t great (although some of collapsing buildings are actually done properly and so look more impressive than cheap CGI) and the script does nothing new (“I won’t let you down…. EVER!”), where the film works well is in its pacing. There’s usually something silly going on or building up to something. From being trapped in a train, to climbing elevator shafts to watching a hot room get hotter – it keeps you going. This is good because the 90 minute tv movie works much better usually than the three hour mini series for pacing and suspense. Of course there’s a whole lot of silliness in plots and action sequences but nothing that’s outrageously pathetic.

Most of the earthquake centres on small close up set pieces but because the sets are real, they work quite well. The train derailing isn’t cringeworthy either. The guilty parties are the CGI flames in the train afterwreck and the miniatures looking very shiny!

I’m surprised its scored so lowly on IMDB. Some shoddier works in the genre have higher scores than 3.7 and I don’t think this film deserves that at all. Is it a masterpiece? Certainly not – but it’s far from god awful. It’s well paced, if a bit gore and death lite. Those of us who enjoy all the badness in a movie can relish in some of surreal accents attempted – including one man who literally talks like Tarzan in English.. but in an Americanized accent. You can also whine at the daughter Cherrie’s really annoying voice that gets more high pitched the further the movie continues. Still, its all in good jest just to see how you’ll find the family all back in love with eachother in ninety minutes time.

There’s only two character deaths on screen and so that award goes to Leon who after being blinded by hot steam early on eventually gets pancaked by a falling elevator! Double whammy! Obviously wanted to get rid one of the better European-American accented people early as they cost more…

Purely for the fact that every line he speaks has such a unique delivery and that he survives the whole ordeal – Vicktor (Michael Zelnicker). Primative is the word.

Aside from all of Vicktor’s lines and the stupid shmultzy wedding ring saves the day ending, how the hell did Leon know exactly where to move his chess piece when he’s not even in the the same building at the beginning of the film?!

Goofy, unintentionally comical in places but still well cobbled together, Nature Unleashed: Earthquake is a silly but enjoyable enough disaster movie that is small in scale and big on cheese.