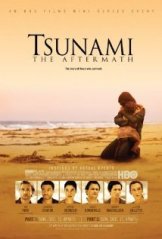 When I first heard about Tsunami The Aftermath my first initial reaction was “too soon”. Other disasters are left alone for at least a good decade before they’re poked and prodded by producers. How could you serialise the biggest natural disaster we’ve experienced for such a very long time? A lot of people are still recovering, surviving and getting their lives back on track. Perhaps by avoiding the whole tragedy and focusing purely on the aftermath, this mini-series manages to stay the right side of exploitation by keeping purely to the emotional side of things and how to pick up the pieces.

Following on from the Asian Tsunami, we follow a group of survivors and aiders as they try to reunite with loved ones and save as many lives as they can.

Aside from the Tsunami and ensuing drama we have a lot of government red tape to stop all and sundry as well as land stealers.

Perhaps wisely, aside from a few real life shots taken from video cameras, the Tsunami itself is contained to a very small section of the film. Instead we follow a couple whose lost their child, a reporter, a Thai worker, a small family and a few aid workers as they cross paths with each other on their search for survival. The camerawork is kept smooth and steady. There’s no production frills on any artistic judgements on any level. There’s no hint of exposition for entertainments sake. Everything is focused on the people we are following and with a collection of fine actors and actresses, the story, while slow but constantly evolving, is kept purely centre to everything. Chiwetel Ejiofor, Sophie Okonedo and Toni Collette were particular stand outs for me with their sheer range and pitch perfection to the sensitive nature of the story. The realistic portrayal of how parents can utterly shatter apart when they’ve lost their child is heartwrenchingly played out as you see Ejiofor and Okonedo ebb away. There’s no weak link in the acting front at all and although perhaps the journalistic side of things maybe weren’t my cup of tea in general, even they were handled with dignity and respect.

The actual Tsunami itself is shown via very short clips of real footage mixed with close camera proximity of Ejiofor in the water. Aside from that the sheer background devastation in the sets looks both horrific and magnificent. The reconstruction of some of the sets is astounding due the sheer depth of broken debris. Everywhere looks absolutely trashed to bits and the hotel set at the beginning is particularly saddening.

While it may be far too soon for some, Tsunami The Aftermath is an emotional rollercoaster that will affect most viewers. It is a slow burner and to some, I can see that they don’t think a lot happens. Most of the film is character based, talking, interaction with others and the hitting-a-head-against-a-wall as people try to help but find too much blocking their way. It’s an introspective film about how to deal with loss from either losing a parent or a child, or even your whole family and being the sole survivor. It’s also interesting to see how even different organisations struggle to work together to help others. It also touches on some of the less positive events that happened after the Tsunami such as companies trying to claim land from washed away settlements. The fact it doesn’t paint everyone perfectly makes everything much more human too.

It has to be Toni Collette’s character whose single-minded approach to trying to get aid out may anger others but it’s that kind of grit and determination that gets things done in a crisis.

Not particularly weird but I found Samrit Machielsen’s character repeating “all gone” a lot was a bit of a shame and his character deserved more time. He had lost the most and yet seemed to be the least emotional of the cast, simply trying to rebuild again. Whilst I understand that different cultures have different ways of dealing with loss, it just seemed his character development stunted way short. I also struggle a little with things being so British / tourist focused. I understand it from a tv point of view but the Thai people are left out and indeed are extras in the back of the set which is insensitive.

Emotionally devastating and powerhouse acting and set design all round make Tsunami The Aftermath something that will stick with you for a while afterwards. Too soon? Everyone’s of their own ilk and opinion, but when you are ready, this is a well-balanced tribute to all involved.